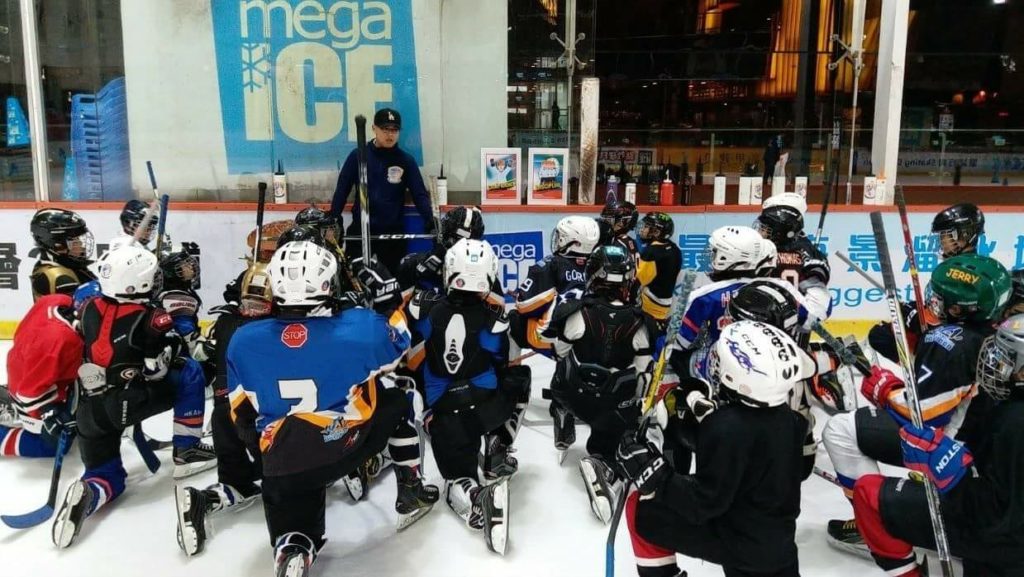 Standing inside of a hockey rink, you’d expect that it’d be cool and brisk, if not downright cold. But as a hockey coach here in Hong Kong in the middle of May, this is surely not the case. It is 33 degrees Celsius outside (which feels like 39 degrees Celsius with the humidity) and the heat has seeped its way onto Mega Ice; the only rink in the city up to IIHF standards. Situated on the 10th floor of the biggest shopping centre in East Kowloon, right now I’m just wishing CCM would make a more breathable tracksuit sometime in the future.

But I’m loving it nonetheless. My job allows me to train players from the most beginner levels to the city’s best youth players, some of whom represent Hong Kong in the IIHF U–20 World Championships. There are few opportunities for a guy like me, who has never had any professional or junior experience, to get paid to coach. Having immigrated to Canada at age 4, I’m blessed to be working in such a dynamic and exciting city from which I was originally born.

As one can imagine, there are differences between minor hockey in Hong Kong compared to more ‘hockey-rich’ nations. A small difference is that there are no individual dressing rooms for teams to gather before and after a game or practice. Players will congregate in a single changing area and often, opposing team members will sit side-by-side one another as they put on their gear. This is interesting as it gives players and parents an opportunity to form new friendships with those outside of their respective teams. The downside is that coaches are unable to give their team a pregame talk until their players are on the ice, gathered around the bench.

Another difference is that hockey is more expensive here in Hong Kong. For instance, I paid roughly $600.00 CAD on my last adult rec league team in Toronto. For a comparable league in Hong Kong with a similar number of games, you can expect to pay double that amount. The issue is that ice is expensive here. Mega Ice in Kowloon, where I do the majority of my coaching and playing, has an hourly rental fee of around $14,000.00 HKD (about $1800.00 USD), whereas hourly fees fall in the neighborhood of $200.00 to $300.00 dollar for an average indoor rink in Toronto. The exorbitant ice fees are passed down to local organizations and leagues. Coupled with the fact that hockey equipment is generally higher here than North America, the price of hockey in Hong Kong serves as a significant barrier to entry for those with are less well off.

Surely the biggest difference though is the significant disparity of talent between Hong Kong players relative to those in Europe or North America. This disparity is present even when comparing to other Asian nations. Countries such as Japan, South Korea and even Thailand possess a deeper and more talented pool of players than Hong Kong. As a coach, I can say this disparity is much less apparent amongst those up to 8 or 9 years of age, who I believe can be able to compete or keep up with some of the best from North America. Once these players enter their preteens however, their development stagnates.

One of the primary reasons for this is due to the lack of facilities in Hong Kong. As mentioned, Mega Ice is the only rink up in IIHF standards. Apart from this, there are only four other rinks in this city that is equipped to hold hockey games and these rinks do not even have player benches. This means that players cannot simply jump over the boards but must open a full-size ice rink door with glass attached after standing on their feet between shifts. To put things into perspective, Hong Kong has a population of about 7.3 million whereas the Greater Toronto Area has roughly 6.4 million people living within Toronto and its four surrounding municipalities. However the latter has hundreds of indoor and outdoor facilities. Unlike kids living in Canada and Scandinavia, Hong Kong hockey players cannot simply jump onto an outdoor ice surface during the winter time. Thus the lack of accessibility for those living in Hong Kong is a daunting obstacle to the game’s reach and the development of its local talent.

In addition to the lack of facilities, I must concede that the disparity of talent is also due in part to the lack coaches here in Hong Kong. Youth players here are generally not afforded the same level of coaches as those found in North America or Europe, nor are there as many for that matter. Another issue is a lack of a viable hockey career path or trajectory for minor hockey players. In North America, AAA players can look forward to a whole host of options after their bantam year, such as being drafted into the CHL, playing Junior or the possibility of landing a NCAA scholarship in their late teens. Minor hockey players in Hong Kong have little to look forward to however, besides playing in the city’s top league (composed of local talent in addition to expats with past professional, college or junior experience) or landing a spot on the national team roster (a team that is heavily politicized, does not always carry the best available players and currently ranks very close to the bottom of IIHF ranking for both the men’s and women’s teams). Sadly, the only viable way for Hong Kong’s best youth players to advance their skills is by playing abroad, which is sometimes the case for the city’s best and most committed hockey players.

Finally, as a nation with a very competitive workforce known more for its stars in the world of business, sports take a back seat once players enter into high school. Instead of a balance of the cerebral with the physical found in places like North America among youths, Hong Kong’s adolescence youths and teenagers are under enormous pressure to do well in school. Thus, sports take a back seat and hockey remains ‘just a hobby’.

Despite the issues affecting Hong Kong hockey and its differences compared to hockey-rich nations, there are many positives to be found. The game is growing here at the grassroots level and it is helped along by the expats who continue their passion for the sport here in Hong Kong. As well, the growth of Hong Kong hockey stands to benefit from China’s participation in 2022 Olympics, as the latter ramps up interests and growth of the sport leading up to the Winter Games. This expanding growth of Chinese interest in the sport can trickle down to Hong Kong as hockey gains more exposure than ever in southern China and the rest of the mainland. In Hong Kong, there are already over a handful of organisations in place which helps grow and sustain the game. Burgeoning interest driven by the Olympics can mean more registered players in the city. Lastly, based on with I’ve seen during my time as a coach here in Hong Kong, I can say the city’s hockey community shows the same dedication to the game amongst its hockey parents and players as its North American and European counterparts. Just like in North America, we have early morning practices as well. For a hockey parent anywhere in the world to wake up at 5:00 am on a weekend to get their child ready for a 7:00 am practice speaks to their commitment. But this dedication is also shown by Hong Kong hockey parents despite a relative lack of hockey culture or tradition in a city where the sport is still very niche. As the backbone of minor hockey, parents of youth hockey players in Hong Kong face more barriers than those in hockey-rich countries. Like parents in hockey-rich countries, they are just as commendable for their dedication to their children as well as the sport.

Overall, my time as a pro coach in Hong Kong has largely been positive. Though I do not see myself working long term in this profession, I can say I’ve gained many valuable experiences which can be a boon for future opportunities. In the meantime though, I will continue pushing to further the development of hockey here in my native land, hoping that maybe one day I may see someone within our little tropical city make it to the NHL. Here is to hope and hard work!

Hope you enjoyed this article from our guest contributor from Hong Kong. If you would like to submit your hockey story to be published on this site, we will definitely be interested and proud to display it. It could be anything from how your team did in a tournament, to an exceptional game your team played or an individual had. Please email your story and pictures to yourstory@hockeyneeds.com