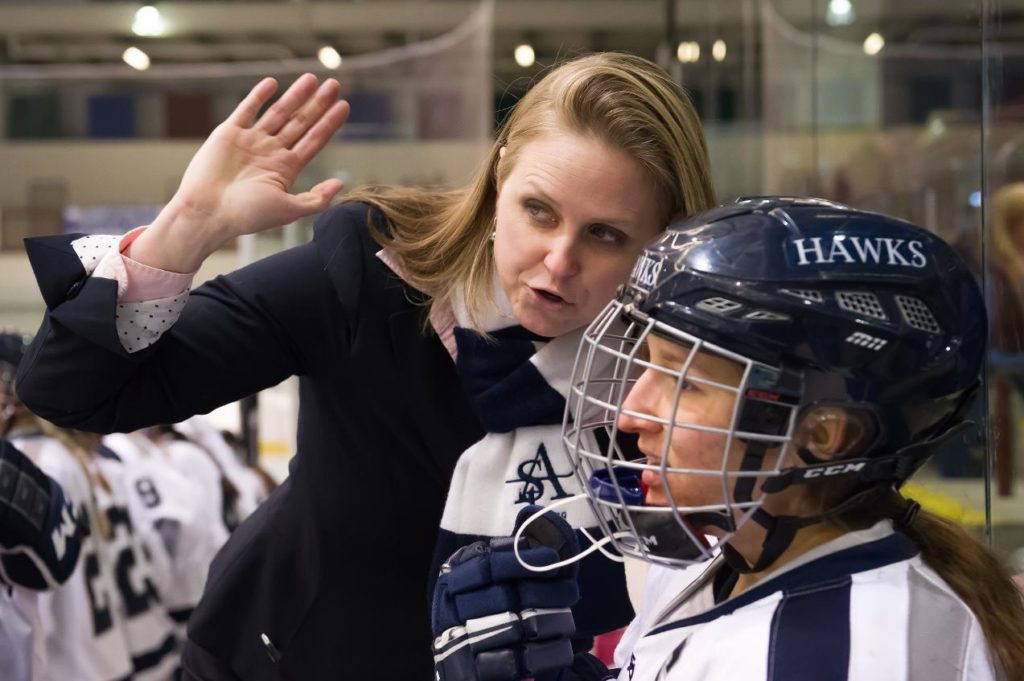 The players who do not Battle and/or Compete in a game, but at practices. The ones that you always see doing amazing skilful moves in practice, but not at games. They just don’t play the way they practice. Basically, the ones you call The Awesome Practice Player!

Believe me, I have felt your frustration with the Awesome Practice Player throughout the many years of coaching minor hockey. My question to you – What will you do with these players to make them all around Successful?

Well, you have some choices, for instance, you could try talking to them, threaten them, yell at them, move them down to the fourth line, but ultimately in the end you benched them. Truth be told, these methods hardly work!

Is there a simple way to solve this problem?

Yes and that is clarity… Without clear instructions, yelling and asking these Awesome Practice Players to do something they do not know how to do literally, makes the problem worse. You need to speak to them at games just like how you speak to them at practice, which is the main reason why they are successful at practice. And yes, you have less time to go into detail during a game vs. practice. Therefore, the key is to be clear and straight to the point.

Most of you will read this and may think – “I’m already pretty clear how I communicate my expectations of what I want from my team”. Ok… Awesome! Nevertheless, I am pretty sure you have second-guessed yourself at one point or another or you may want to evaluate your communication style during a game and that’s why you’re reading this article.

This article is asking… How can I give Clear instructions when communicating with my players during games?

How does this relate to players who are not battling and competing in games, especially The Awesome Practice Player that performs everything you want at practices?

When questioning or talking to players about what they need to do or what their role during a game setting, they always give me vague answers. For example, players will tell me they need to move their feet as fast or as hard as they can. Ok. I agree that you might need to move your feet as fast or as hard, but at all times? Does this help motivate them? And, what about their energy levels?

I usually follow up with a reply like – “How many hard/fast strides should you take in a game and why”?

Again, they really have no answer or it’s all over the place. For the sake of agreement, the average number of strides that a player will take is between 3 to 5 strides before they start moving in a game setting. So, does it really make sense for them just to move their feet as fast or hard as they can for no reason?

Other questions I may ask:

You might now notice how a vague instruction or a nod like move your feet faster and/or win more battles is not actually useful to a player during a game vs practice.  Essentially, if a player has an unclear understanding of what you mean when you tell or nod at them to battle, compete, or if they don’t know what his/her role is, you can agree that they will have a hard time increasing their battle/competitive levels when instructing them from the bench.

Here is a great example of an unclear message I used to do. Upon walking into the dressing room before a game I would say, “This game is important! Let’s go and win this game!” that’s it. Trust me it did not work and did not automatically make these players go battle or skate faster. There is no real substance or significance for them to do so.

Listen, I was in the same boat and needed to change my whole approach. I realized that clarity was one of the key tools to use with dealing with these types of players.  When I was lucky to meet with successful coaches and had the opportunity to watch their practices and/or games I asked tons of questions, took as many notes as possible, and just watched and listened to how they communicated with their players. The number one thing I took away from that experience was that these coaches were giving simple, specific and clear rules to their players to follow before and during the game.

Here Are Some Clear Phases To Start and Follow Up With and Why:

As a coach, you might find that you can look at what your players are doing and give them specific and clear feedback that is on this list. You might even have your own list of things to tell them.

The point is that being vague or unclear does not work for the Awesome Practice Player. Clarity gives them confidence. Clarity gives them exactly what to do. Guess what, most players who know what to do will go and do it. This also includes The Awesome Practice Player. They want to please you too, just as much as your other players. They want to do what you say. Some just do not know how and it is for you as the coach to show them how. Let’s make them successful, so we can call them… Awesome Players!