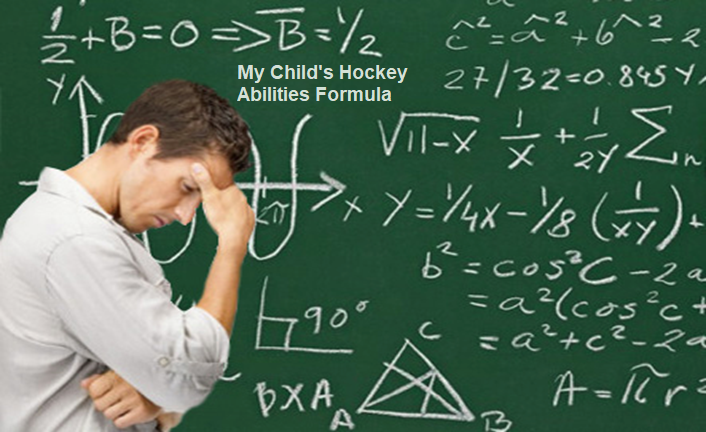 I’m sure most of us have heard parents when they’re at the rinks for tryouts, practices, games, or training, and you can hear their voices full of frustration, “What’s he/she doing? He/She’s capable of handling him/herself better.” Sound familiar? Does to me, too. Every parent is biased when it comes to their child’s hockey abilities on the ice. Why? Because you love your child so much and want to see them succeed, which leads to overestimating your child’s hockey abilities.

For many years I have evaluated many players from all levels of minor hockey. For the most part, parents have been understanding and appreciative of the evaluation I gave their children. But, there have been times when the parents have been in denial and stubbornly held on to the belief that their child is the next Generational Player.

Now that I’m a father of a minor hockey player, I can see why and understand how parents can fall into the trap of overestimating their children’s skills. It is the emotional attachment we have as parents to see our children succeed vs. seeing them fail. Basically, it breaks our hearts to see the sadness in our children’s faces. The reality is this type of behaviour or mindset can cause more harm than good, even though our hearts are in the right place.

I have the pleasure to share a well-penned and thoughtful article by a fellow Minor Hockey Writer – Warren Tabachnick from Crossicehockey.com. Warren’s article provides his helpful and honest perspective for parents on how to – Avoid The Trap Of Overestimating Your Child’s Abilities.

Here is What Warren Tabachnick Has To Say

Like most parents (especially of the hockey variety), you probably think your child is the best. You wonder why they are not on the first line or given more ice time… or why they’re not the starting goaltender. As a parent, it’s only natural for you to feel this way.

But let’s face it, there comes a time when every parent needs to step back and look reality square in the face. Unless you’ve actually suited up and taken to the ice or stood behind your players on the bench, it’s almost impossible to be objective in evaluating your child’s skills and talent to play the game. This is how you can fall into the trap of overestimating your child’s abilities.

Like it or not, our emotional attachment to our offspring impedes our ability to fairly assess their performance especially when stacked up against their teammates, of whom we can be much more critical.

The fact is your child’s current relative skill level may not hold up as they move on in their playing career. As they get older and move into higher levels, players just keep getting bigger. Also—heaven forbid—injuries can totally derail the trajectory of a youth hockey career, as can a simple change in your kid’s focus. Maybe they’ll find themselves getting involved with another sport or hobby, or with a love interest who takes up much of their time (they are getting older, aren’t they?). You get the picture.

If you see that your child is working hard and doing everything they can to improve, but it’s just not happening, it’s a good indication that you are overestimating your child’s abilities, and they’re not as good as you think they are. Your child’s coach might let you know that he or she lacks the ability to play a specific position (or even make the team). That doesn’t mean they should quit playing; it just gives you some better perspective.

In fact, if your child does possess noteworthy athletic ability, you can be sure those around you will let you know. Perhaps the best indication that your child has got skill is the reactions from his/her teammates.

It’s not so bad to be overestimating your child’s abilities sometimes. But if it causes you to react in a manner that creates friction with the coach or the other parents—not to mention your child—it’s time to look yourself in the mirror.

If on the other hand you truly believe your child is the next Sidney Crosby, get a second opinion from a qualified coach or someone who has played at a high level. They will know best if your kid has what it takes to move on.

Here is the link to Warren’s actual article – https://www.crossicehockey.com/overestimating-your-childs-abilities/

If you liked and enjoyed this article, please visit CrossIceHockey.com to read other in-depth and thoughtful Minor Hockey Articles by Warren Tabachnick.

Hope you enjoyed this article from our guest contributor Warren Tabachnick from CrossIceHockey.com. If you would like to submit your hockey story to be published on this site, we will definitely be interested and proud to display it. It could be anything from how your team did in a tournament, to an exceptional game your team played or an individual had. Please email your story and pictures to yourstory@hockeyneeds.com